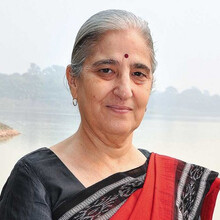 Ms. Jhabvala represents Self-Employed Women’s Association (SEWA), HNSA’s parent organisation, on the Board. She has worked for over 40 years with SEWA and is, currently, the National Coordinator for SEWA. She is also Chairperson of SEWA Bank. Ms. Jhabvala co-founded and is the current Chair of Women in Informal Employment: Globalizing and Organizing (WIEGO) which is based out of Harvard University, USA. She has been a Member of the Secretary General’s High-Level Panel on Women’s Economic Empowerment since 2016. She also served as the Chancellor of Gandhigram Rural University between 2012 and 2017.

Ms. Jhabvala has been active for decades in organising women into organisations and trade unions in India and has been extensively involved in policy issues relating to poor women and the informal economy. In 1990, she was awarded the Padma Shri, one of India’s highest civilian honours.