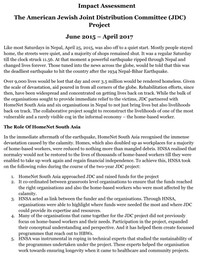 Like most Saturdays in Nepal, April 25, 2015, was also off to a quiet start. Mostly people stayed home, the streets were quiet, and a majority of shops remained shut. It was a regular Saturday till the clock struck 11.56. At that moment a powerful earthquake ripped through Nepal and changed lives forever. Those tuned into the news across the globe, would be told that this was the deadliest earthquake to hit the country after the 1934 Nepal-Bihar Earthquake.

Over 9,000 lives would be lost that day and over 3.5 million would be rendered homeless. Given the scale of devastation, aid poured in from all corners of the globe. Rehabilitation efforts, since then, have been widespread and concentrated on getting lives back on track. While the bulk of the organisations sought to provide immediate relief to the victims, JDC partnered with HomeNet South Asia and six organisations in Nepal to not just bring lives but also livelihoods back on track. The collaborative project sought to reconstruct the livelihoods of one of the most vulnerable and a rarely visible cog in the informal economy – the home-based worker.