Garment Supply Chains In South Asia: How HBW Organisations Helped Home-Based Workers Cope With The Aftermath Of The Pandemic

Garment Supply Chains In South Asia: How HBW Organisations Helped Home-Based Workers Cope With The Aftermath Of The Pandemic 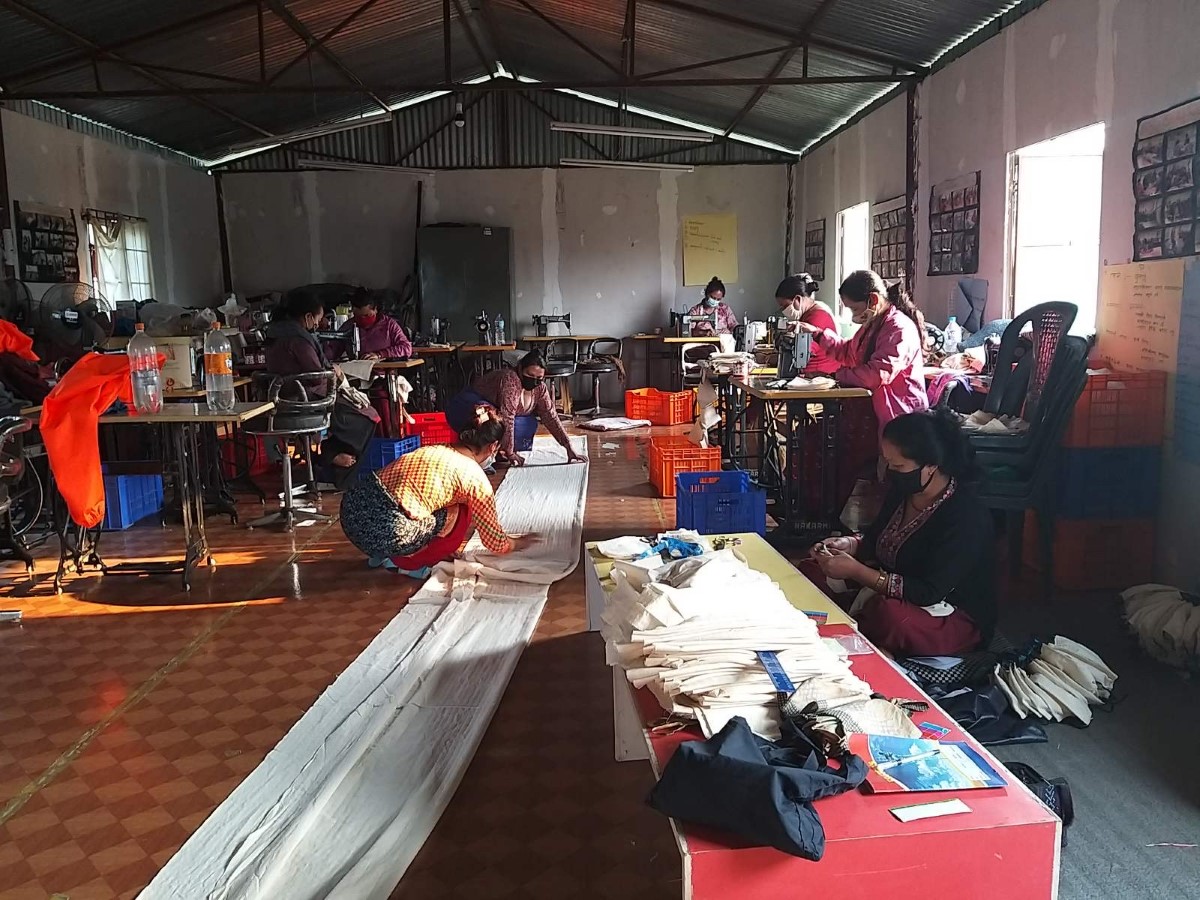 For centuries, the South Asian region has been renowned for its textile traditions and heritage. These skills have been nurtured and perfected not in busy factories and by famous brands but by unknown home-based workers. Even in the 21st century, the toil of these workers at hand-pulled looms and the precision of their needles brings in business worth billions. Home-based workers form an integral, yet, unseen part of supply chains. Their handiwork is preserved and passed on from generation and generation winning plaudits the world over but they receive little recognition for their work.

HomeNet South Asia (HNSA), in the recent years, has focused its interventions on addressing the varied and unique challenges that homeworkers face in global garment supply chains. Towards this, HNSA has produced the “Working in Garment Supply Chains: A Homeworker’s Toolkit.” This comprehensive toolkit was first released in February 2020 during a training for homeworkers in Nepal. During the training, the homeworkers – from garment hubs like Tiruppur (India), Karachi (Pakistan), Dhaka (Bangladesh), New Delhi (India), and Kathmandu (Nepal) – were introduced to tools and concepts – like, the calculation of fair and living wages, organising, and transparency tools – that would help them combat the issues they faced while operating in supply chains. They also learned how to map the supply chains that they were part of in order to improve transparency and promote accountability.

However, due to the novel coronavirus, the year 2020 saw a dramatic and devastating change in how garment supply chains function. By mid-March of the year, homeworkers stopped receiving work as global marketplaces shutdown and economies came to a grinding halt. It is estimated that there was a 70% drop in imports from Asia’s garment hubs to major markets such as USA, Australia, Europe and Japan. As demand from consumers came to a full-stop, brands and buyers tried to mitigate their losses by cancelling or delaying ongoing production, delaying payments and halting all future orders. This led to the large-scale shutdown of factories, in major garment hubs, and also resulted in job losses for factory workers and workers down the supply chain, including, home-based workers. These workers received no pay nor had access to any relief packages, directly impacting their income security.

As the pandemic spread, most South Asian countries could not extend social security nets or feasible healthcare to its informal workers, as these mechanisms were not formulated pre-pandemic. Home-based workers especially receive little to no coverage in state-backed social protection schemes and pandemic relief.  In this hour of acute crisis, where home-based workers have been struggling for their daily survival, it is representative organisations that have come to the rescue. While some organisations have been engaged in distributing food essentials and linking home-based workers with government aid, others have reimagined their supply chains and are equipping workers with the skills to keep with new demands.

This piece explores two supply chains – in India and Nepal – and how organisations, working in these scenarios, are supporting home-based workers during the pandemic.

SAVE: An Organisation Working Towards Securing The Rights Of Home-Based Workers And Linking Them To Critical Aid In India’s T-Shirt Capital

Known as India’s T-shirt capital, Tiruppur in Southern India is one of South Asia’s leading garment hubs. 90% of the cotton knitwear products, produced here, are procured by major global brands and retail chains from the United States, Canada, Australia, and Europe. A large part of the garment workforce in Tiruppur are migrants from all over India. And women home-based workers are a vital part of supply chains here.

At the top of chain sits the global brand or retailer who provides work orders to large export houses or suppliers. Often, due to acute competition, exports and suppliers bid for and procure orders at hugely discounted rates. Also, due to the overwhelming bulk of orders, suppliers allocate certain aspects of production to smaller workshops and contractors. These contractors then provide the work directly to home-based workers – who are often women – or further sub-contract through agents. The involvement of many actors ensures that supply chains in Tiruppur are complex and are hard to map. However, it has be to noted that women home-based workers, in Tiruppur, rely heavily on the garment industry for work. And they work in a range of jobs – from checking to trimming, unravelling pieces of clothes, embroidery, packing, folding, garment waste segregation, tailoring, labelling, cutting, embellishment, tag assembling, and packing.

During peak season, home-based workers in Tiruppur receive work through the month and put in at least six to eight of hours work every day. However, this came to a halt when the Indian government declared a nation-wide lockdown in March of 2020 in effort to contain the spread of the coronavirus. Overnight, factories were shut down and home-based workers were rendered jobless. Many women home-based workers reported that they had to dip into their meagre savings during the lockdown period in order to survive, others who had no savings had to rely on donations from NGOs and any government aid that was forthcoming. Scores of migrant home-based workers also chose to return to their home states across India. Home-based workers have also taken up work in other sectors like construction/ As the year progressed, factories began operations in a limited capacity and many switched to producing PPE and masks. However, this has meant little for Tiruppur’s home-based workers as they continue to face scarcity in work.

In this scenario, SAVE – a Tiruppur-based organisation that has been working for the right of home-based workers in garment supply chains – has consistently assisted them with relief packages, linked them to government ration distribution programmes, is organising home-based workers, and is lobbying with the government for their recognition and their rights to social protection schemes.

SABAH Nepal: A Producer-Owned Company In Nepal Reimagining Its Supply Chains In The Aftermath Of The Pandemic

Established in 2008, SABAH Nepal now operates in 23 districts of Nepal and their interventions have reached over 10,000 women home-based workers, with over 3000 forming their primary membership. The producer company operates on a cluster-level model and has since its inception established eight common facilitation centres (CFCs) and 53 business units across the country. Overseeing the operations of these centres and units is the Trade Facilitation Centre (TFC) in Kathmandu, Nepal. SABAH Nepal has established two core areas of business – the crafts supply chain and another pertaining to food products. With the craft value chain, HBW members of SABAH Nepal produce handcrafted items from allo, bamboo, cotton, hemp, wool, beads and sequins. Second, with the food supply chain, they also market large cardamom, honey, fresh vegetables, spices, cereals, dairy, fruits, coffee and non-timber forest products. While SABAH Nepal’s food value chain is targeted towards the domestic market, the crafts are marketed globally.

Before the pandemic, the TFC, in Kathmandu, would work with brands, procure orders and oversee the designing and sampling of products and also distribute to the clusters. The work would then reach the CFCs and the business units where elected leaders coordinate with the home-based workers to deliver the orders. The home-based worker leaders also ensure transparency by sharing details on piece-rates and other critical details. Since the company is owned and operated by the workers, there is no place for middlemen or contractors.

However, when the COVID-19 pandemic became a reality, SABAH Nepal was forced to refashion its crafts and textile supply chains. It adapted to the changing scenario and invested in training its members to take up production of PPE along with reusable masks, coveralls, liquid sanitizers and soaps to meet the demands of the local market. Instead of waiting for the international market to revitalise, SABAH Nepal instead chose to concentrate on the local market and showcased products at its own brick-and-mortar and online stores.  It also engaged its membership in agricultural and food processing – making preserved foods, ready-to-eat items and frozen foods that were then sold at local supermarkets and SABAH’s own Village Café.

While both SAVE and SABAH Nepal are starkly different organisations who supported their membership in different ways, it is important to note that the home-based workers benefitted from being organised. In fact, looking at examples, from across South Asia, it has been noted that organised home-based workers have been able to survive the devastating effects of the pandemic better when they were organised.

While organising efforts should continue, governments and brands have a responsibility to shoulder when it comes to home-based workers. They need to be recognised as workers who contribute to, both, the growth of countries and of businesses and should be afforded the labour protections due to them, including, inclusion in policies and programmes as well as social security and protection programmes. Without this, there is no doubt that home-based workers will find it next to impossible to recover from the blows that the pandemic has dealt them with.